You are here: Home / Archives for politicians 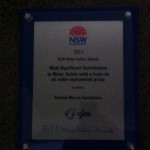 The NSW Shadow Minister for Emergency Services has announced her support for significant changes to drowning prevention and awareness in NSW following the state election in March. Among the changes proposed by the Shadow Minister,  Melinda Pavey are: Strip five government departments of responsibility for this issue Make Emergency Management NSW take charge (in a similar fashion […]

Is your pool as SAFE as it can and should be?     Video lessons on correct pool fencing. The Samuel Morris Foundation has been working in partnership with KidsHealth at the Childrens Hospital at Westmead and the Swimming Pool and … END_OF_DOCUMENT_TOKEN_TO_BE_REPLACED

Congratulations on taking the first step in giving your kids a skill for life! Getting your children involved in water safety and swimming lessons is one of the key steps you can take to help make your children safer around the water. Accredited … END_OF_DOCUMENT_TOKEN_TO_BE_REPLACED